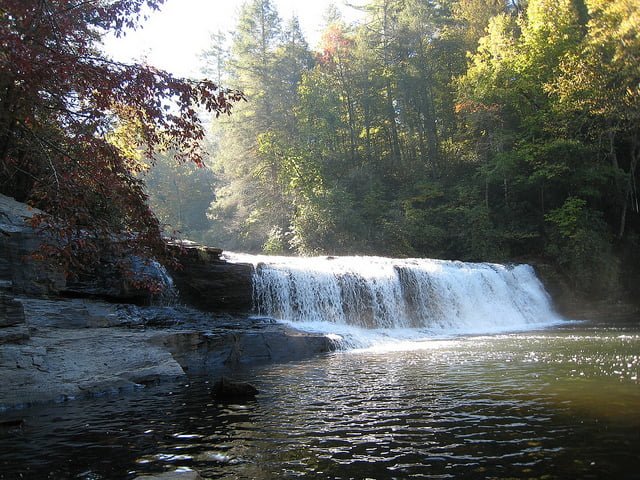 Many of you  have likely heard of the Hunger Games trilogy, written by Suzanne Collins. Besides the acclaimed book trilogy, there has been an excellent series of film adaptations. You may be wondering, where was The Hunger Games filmed? In this day and age, it can be hard to tell if a movie was shot at an actual location or just on a large sound stage. Those of us from North Carolina who have seen the first movie loved it because it was filmed right here in our gorgeous Western North Carolina mountains. Come with us and let us show you where some of the scenes were shot and how you can visit where the Hunger Games was filmed.

For those of you who don’t know, The Hunger Games series is set in a dystopian future America; however the country is much different than it is today. It is called Panem and is divided into 12 Districts and the Capitol. Each District is responsible for a certain commodity like coal, fish, lumber, etc and provides it to the Capitol. In the past, there was a rebellion by the Districts against the wealthy, tyrannical Capitol, but they lost the war. To remind the rest of the residents of the price of rebellion, each year the Capitol selects one boy and girl from each district and forces them to fight to the death for entertainment in the Hunger Games. The story follows a girl named Katniss Everdeen from District 12 (played by Jennifer Lawrence in the movies), who volunteers as tribute when her younger sister is chosen for that year’s games. The rest of the series chronicles the chain of events and ultimate rebellion set off by her brave act.

Much of the first movie takes place in the rural District 12, as well as the lush, forested setting of the Games. Unlike many modern movies, these were not filmed on a soundstage. In fact, the first Hunger Games movie was shot entirely in North Carolina, in towns like Asheville, Barnardsville, Black Mountain, Cedar Mountain, Charlotte, Concord, Hildebran, and Shelby. The filmmakers used abandoned North Carolina towns as the backdrop for the rural District 12, which was known for its coal. Tourists now love to come to these scenic filming locations and enjoy seeing first hand the buildings that were used. For the scenes in the woods, the filmmakers went to DuPont State Forest. This area is not only home to this film and others, but also to many beautiful trails and waterfalls.

If you want to visit all of these places where The Hunger Games was filmed, there are plenty of Hunger Games itineraries that you can choose from. One that is very inclusive has you going from city to forest across North Carolina to experience it all. Here is a detailed Hunger Games itinerary for fans. It shows filming locations as well as the places in town where actors enjoyed eating and drinking.

For those of you who are fans of the series, the last installment of The Hunger Games trilogy will be released November 20th. When you do decide to plan a trip to visit where The Hunger Games was filmed, we hope you will consider staying with us at The Orchard Inn. We are conveniently located in Saluda, NC and we are close to many of these surrounding filming locations. Our B&B is charming and beautiful, with an emphasis on amazing service for our guests. Each morning get your day started with our wonderful breakfast which is prepared fresh by our chefs. Each night with us relax and enjoy views of the nearby mountains. Sleep soundly in our comfortable beds and choose your own pillow from our Pillow Menu! Contact us today and let us help you plan your trip to the western North Carolina mountains!

Want to learn more about our area? Request your free Vacation Guide today!

What You Need to Know About the Green River Games

The Biltmore Summer Concert Series: What You Need to Know