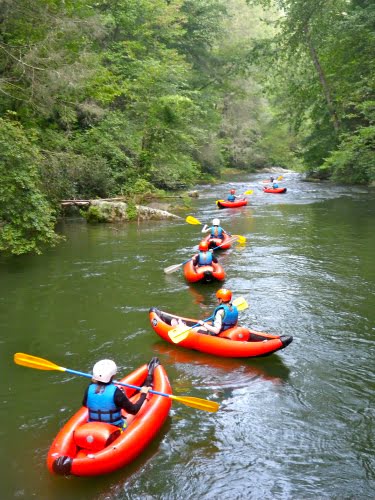 The Green River, which flows through the Blue Ridge Mountains, sets the stage for a new Saluda NC event, known as the Green River Games.  Taking place the weekend of September 6th-8th, athletes will be able to run and ride the trails and race down Class 1 and 2 portions of the river.  This multi-sporting event will include kayaking, stand up paddling, trail runs, road racing and trail and bike racing.  This weekend of events is sure to become a favorite for nature enthusiasts as it celebrates not only the river but the surrounding mountains. 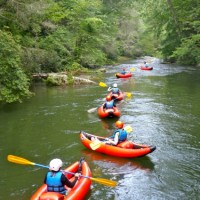 The weekend will begin with The Cove Climb 6k road race.  Runners will run along the Green River and end at the kick-off party held in downtown Saluda.  Continuing the games on Saturday, the morning begins with The Sunshine Enduro, a timed downhill mountain bike event.  Also held on Saturday is the Stand Up Paddle race.  Athletes will race for 4.8 miles, with the top ten competitors competing again on Sunday in a half mile sprint down Bayless Boof on Upper Green River.  Sunday’s events include the Big Hungry Half Marathon and the Big Hungry 10k, also a canoe and kayak race known as the Upper Green Stage Race.

For athletes wanting to compete in all three areas including running, paddling and biking, the Silverback competition will be held on Sunday.  This signature event is being called the most difficult multi-sport event in the world.  Racers will begin with an eight mile kayak along the Tuxedo Hydro station on the Green River.  After kayaking, athletes will mountain bike for eight miles and then transition to a trail run to finish.

Registration can be done online at www.greenrivergames.com, The Gorge and Party Place.   Participants can also register up to one hour prior to the event.  Prices range from $35 to $75 depending on the event.

While in town, be sure to check out the shopping, dining and live music Main Street Saluda has to offer.  After participating in the games, cool down at Green River Brew Depot where they feature twelve craft beers from the Western Carolina area.  For dinner, stop by Historic Thompson’s Store and Ward’s Grill.  This local eatery has been in business since the early 1900’s and claims to serve the best burger in Western North, Carolina.

Since Saluda is known for its Orchards, take a stroll by Atkins Orchards where you can purchase cider, jams and jellies, relish and hot sauce just to name a few.  If you are looking for homemade items from the Saluda area, shops like Kathleen’s Gallery and Heartwood Gallery, both located on Main Street, feature items that reflect the region.

When planning your getaway, be sure to check out The Orchard Inn for your weekend stay.  Rich in history and offering nine guest rooms and five cottage suites, you will be nestled in the scenic mountains ready to relax and enjoy the view.  Breakfast is served daily on the beautiful glassed-in porch overlooking the Warrior Mountains.  With nature as your backdrop, the possibilities for your weekend are endless.  The hardest part of your trip will be deciding just what to explore first.

Everything You Need to Know About Green River, NC, Fly Fishing

Go on the Excursion of a Lifetime with Green River Adventures