A Night in Vienna Benefit Concert

The Orchard Inn and AmiciMusic present: “A Night in Vienna: Opera Favorites from Mozart, Lehár & Strauss”

UPDATE: This concert has sold out. Please call us at (828) 749-5471 or explore our Events page for information on other upcoming events at The Orchard Inn.

We are excited to announce a follow-up to last year’s sold-out benefit concert, co-hosted with AmiciMusic! Last year’s USO Show was such a hit, we wanted to hold another evening of fun and music, all to benefit the Saluda Historic Depot!

AmiciMusic, Asheville’s award-winning music organization, will present an elegant and entertaining evening of famous operatic scenes and arias from three great Viennese composers – Mozart, Lehar, and Strauss – on Sunday, March 26 at 4:00 at the Orchard Inn. This performance will be a fundraiser to benefit the Saluda Historic Depot. 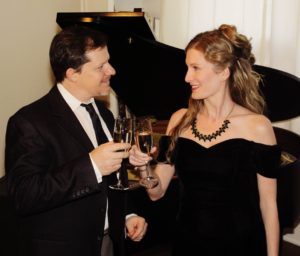 Singers Amanda Horton and Jonathan Ross, both well-known to area audiences for their great musicality spirit, and chemistry, will team up with AmiciMusic Artistic Director Daniel Weiser on piano for this spectacular, semi-staged show filled with great singing, costumes, and witty repartee.  They will sing excerpts from some of their signature roles that they have performed with Asheville Lyric Opera and numerous regional companies, including scenes from Mozart’s “Marriage of Figaro,” “Don Giovanni,” and “The Magic Flute,” as well as Lehar’s “The Merry Widow” and Strauss’ “Die Fledermaus.”

We will be hosting this one-night-only event here at The Orchard Inn and will be offering delicious Viennese hors d’oeuvres as well as a full cash bar.  The cost is only $50 per person. The views will be exquisite, the food incredible, the atmosphere cozy, and the music superb.  The concert will benefit the Saluda Historic Depot, a nonprofit dedicated to making the historic train station into a museum that highlights the history of the railroad, Saluda’s downtown, its people, and the history of its natural resources.  Seating will be limited and reservations are required.

Where to Get Your Tickets:

THIS EVENT IS SOLD OUT. View our Events page for other upcoming events.

AmiciMusic is a non-profit chamber music organization based in Asheville, NC and Baltimore, MD dedicated to performing chamber music in intimate venues and non-traditional spaces.  AmiciMusic, meaning “music among friends,” seeks to break down barriers between performers and audience through brief discussions of each composer on their programs.  AmiciMusic also strives to have a relaxed and informal atmosphere at their concerts to highlight the spirit of community and camaraderie.

Jonathan Ross, baritone, has both undergraduate and graduate degrees in music.  Locally he has performed as a soloist with the Asheville Symphony and Brevard College.  He has also
performed leading roles with the Tri-Cities Opera in Binghamton, NY, Crested Butte Music Festival, Opera Creations, and Asheville Lyric Opera. Jonathan is the bass section leader at Grace Covenant Presbyterian Church.  Besides music, Jonathan is an instructor at Asheville-Buncombe Technical Community College in the Digital Media Technologies program, a freelance designer, and a web developer.

Daniel Weiser, Artistic Director, and piano, has a Doctorate in Piano/Chamber Music from the Peabody Conservatory, where he won the Richard Franko Goldman prize for outstanding contribution to musical and education life.  He has performed on many great stages, including the Weill Recital Hall of Carnegie Hall and on the Dame Myra Hess Concert Series in Chicago. He has also concertized around the world, including Israel, Thailand, Holland, and France and was the 1996 U.S. Artistic Ambassador Abroad, for which he performed on an eleven-country tour of the Middle East and Asia.  He has been on the music faculty of Dartmouth College, Johns Hopkins University, and the prestigious St. Paul’s School in Concord, NH.   He is the founder and Artistic Director of AmiciMusic as well as the co-founder and Artistic Director of Classicopia, a similar chamber music organization based in New Hampshire.  A phi beta kappa graduate of Columbia University with a degree in American History, he also spent a year at Harvard Law School at the same time as former President Obama.  Dr. Weiser now lives in Baltimore with his wife, Dr. Kisha Weiser, and their eleven-year-old twin daughters, Emma and Sophie.