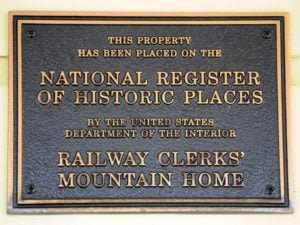 Did you know that Orchard Inn was built almost 100 years ago? Its incredible history is linked back to the railroads, the very reason why much of the mountainous western North Carolina was able to begin its population. During your stay, take a moment to remember the past. Whether you are partaking in one of the many fun activities in our complimentary Vacation Guide or relaxing at the inn, know that you are staying in a piece of western North Carolina history!

Unlike many of the old inns of its time, the Orchard Inn was not originally open to the public. Built by the Brotherhood of Clerks for Southern Railway in 1926, the simple farmhouse-style lodging was created as a summer getaway for railroad employees and their families, many of which took part in building the Saluda Grade. Located at an altitude of 2500 feet and part of the thermo-clime, the temperatures were considerably cooler than South Carolina, Georgia, and Louisiana, where most of the clerks resided. It was the perfect getaway!

Deep porches on all four sides of the inn, originally called the Mountain Home, allowed guests to circumnavigate the building as they sought the coolest spots throughout the summer days. Sitting in rocking chairs and playing cards or checkers were the primary pastimes here. You can still do the same today!

The second floor was originally designed with 10 guest rooms with separate men and ladies communal bathrooms on opposite ends of the hallway for clerks with families. Unmarried clerks were given more primitive quarters in one of the three bachelors’ bunk rooms on the first floor. Guests could enjoy three meals a day downstairs in the basement dining room. All the guests shared the spacious first-floor lobby; with its wood floors, timber posts, numerous windows and doors opening to porches on all sides, the area was, and remains, a breezy retreat. 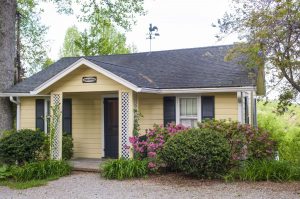 Orchard Inn now offers private cottages as accommodations. Also first built in 1926 , the Paulownia, Boxwood, and Twin Poplar cottages were first created to house the inn’s staff. They were originally very simple structures but have since been modernized.

Saluda and the Orchard Inn

Orchard Inn also has a strong link to the town of Saluda’s history. Many local citizens found jobs working at the Mountain Home or providing services for its visitors. For example, Mr. Bill Pace, a native of Saluda, and his family supplied wood and coal as well as transporting guests with their baggage from the train depot in town to the Inn for 25 cents per person.

After the Mountain Home

After the railroad began to become outdated, there was no longer use for the Mountain Home. After being sold in 1963, it fell into a state of disrepair and neglect. From 1974-75 it was owned by Ms. Ella Sue Smith of Beaufort, SC who called it the White Stag Inn. It was then purchased by the Watson family from Florida who renamed it the Wayside Inn. After also opening a dinner-only restaurant inside, they resold it in 1978. Peter Vassil then purchased the property, called it the Railroad House, and operated it as a restaurant for three years. In 1981, the inn reached its lowest point when it was closed and all furniture sold at public auction.

Also in 1981, Ken and Ann Hough from Charlestown purchased the property and completely renovated the main building and cottages to create the wonderful bed and breakfast it is today. They ran the Inn for 12 years before leasing it to Newell & Ronnie Doty from 1995-97. Bob and Kathy Thompson purchased the Inn in 1997 and ran it very successfully for the next 13 years.

Now, the Orchard Inn is in the stewardship of Marc and Marianne Blazar. After searching for three years to find the perfect bed and breakfast, they knew the moment they walked up the front steps of this wonderful historic building that their quest was over. They had found the place of their dreams!

Stay with Us at Our Historic Inn

Now that you have read our story, it’s time to book your stay and experience this magical place for yourself. Browse through our cozy accommodations to start planning your trip! Relax and rejuvenate at our mountain retreat just like guests did almost 100 years ago.

The Orchard Inn is on the National Register of Historic Places as the Railway Clerks’ Mountain Home.