Asheville, North Carolina is known for its beer, and for good reason! When you visit the city, there’s a craft brewery around every corner. Located on your way to Asheville from Orchard Inn, the Sierra Nevada Brewery in NC has made a name for itself nationally. You’ve probably seen their brews in the grocery store or on draft at your favorite bar, but a Sierra Nevada Brewery tour will take your tasting to the next level. Discover even more places to explore when you access our complimentary Vacation Guide!

Get the Vacation Guide

The History of Sierra Nevada Brewery in NC

The Sierra Nevada Brewing Company was officially founded in the 1980s. Back then, most of the equipment needed to brew beer had to be custom made. Not long after its founding, the brewery began to produce its first Pale Ale, and in 1981, crafted one of the first “American” IPAs with its Celebration Ale. Fun fact: The early recipe for the American Stout made back then is still very much used today!

Over the decades, the brewery continued to grow and expand. Demand skyrocketed. In 2014, they opened the brewery in Mills River, NC. A year later, they opened the Taproom and Restaurant, also in Mills River, fully completing the East Coast brewery. Today, the Mills River brewery continues to be a leader in innovation. It was recently awarded a LEED Platinum Certification in 2016! In 2017, they made a few changes to go Green. They installed a Tesla Powerpack battery system and some other innovations to allow the brewery to be incredibly efficient with the energy it uses.

The Sierra Nevada Brewery is just a half hour away from Orchard Inn, so you need to put it on your list of things to do while you are here! The brewery offers so much to do for visitors. Here’s a rundown of the tours you can take: 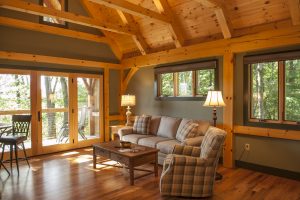 Our area is full of activities like a Sierra Nevada Brewery tour! Our mountain location is just 30 minutes from the brewery and 40 minutes outside the city of Asheville. When you stay with us, you get the best of both worlds. Set back in the small town of Saluda, you’ll get to enjoy fresh air and the peace and quiet of our secluded location while still being close enough to enjoy Asheville. Browse our accommodations to start planning your stay! We can’t wait to see you.

Your Complete Guide to the Best Breweries near Asheville, NC

3 of the Best Asheville Moonshine Distilleries You Need to Tour

Asheville Brews Cruise: A Tour for the Thirsty